What is the difference between an Indian and Eastern European programmer? 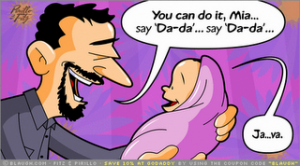 Last week, I had a conversation with somebody about the differences between Indian and Eastern European programmers. Or maybe we spoke about programmers in general. The thing I find always hard in our business is to answer questions about these differences. For I believe the real answer actually is: it depends on the person you have in front of you. there are good and mediocre developers in the Netherlands, Sweden and any other place on earth.

One thing he mentioned made me think. He told me that in his company, they want to hire the people that live and breath technology, people who are always playing with their pc, in the evenings, weekends, always. And always try to learn new technologies, because they have an in-built curiosity for new technology. With such people on board, you will build great products.

Then we arrived at discussing India. I told him that in India, the whole country breathes IT. IT is believed to be the main industry to put India on the map in the decades to come. This leads families to put all their savings apart just to get their children on one of the IT universities. The Indian government has stimulated this since the 90’s and this results in the massive amounts of IT specialists that India produces every year. Now the question is: if your family motivates you to start working as a programmer to bring prosperity to the family, will you become the real technology enthusiast most companies would love to have?

In the Netherlands, there are only about 2000 IT graduates per year, because most people don’t choose a technnical path in their lives. But those people must be intrinsically motivated to choose that path. The same is true for many countries in the rest of Western Europe and also Eastern Europe. The former Soviet Union stimulated people to go for a technological education but for different motives. The past decade, the IT industries in Eastern Europe have grown substantially following the success of outsourcing to India. The role of government in for example Ukraine, is less articulate in motivating people to follow a technical education as far as I know. I do not know to what extent Eastern European families put all their savings into the IT education of their children, but from what I know, this is less so than in India.

Nevertheless, there is an abundance in very smart and motivated IT people in India. And the same for Eastern Europe, where you could also find people that are not as motivated and ‘IT-fanatical’ as you would hope.

Could there be a difference in the average quality of the programmers in one country, caused by the reasons programmers become programmers?

It would be interesting to receive some perspectives on this question both from people in India and in Europe.

4 thoughts on “What is the difference between an Indian and Eastern European programmer?”