Do Cultural Values & Behaviours Have an Impact on Agile Adoption?

As a professional Agile practitioner and an enthusiastic world traveller, online presentations and articles such as “Scrum doesn’t work in China!?”, “Questioning if Agile works in Asia” and “5 reasons why Agile does not work in Germany…” kept capturing my attention. It got me thinking; when organisations adopt Agile, what impact do cultural values and behaviours actually have? Are some cultures naturally more suited to adopting the Agile mindset than others? Is there such as thing as an ‘Agile culture’ that emerges wherever Agile practices are used?

With these questions going around and around my mind, I began researching this topic. I found that very little actual research had been done on the topic but I did learn a lot about cultural models and the work of sociologists in studying human behaviour. In the aforementioned article “Scrum doesn’t work in China!?” Bas Vodde studies the Hofstede tool and a survey to look at how well Scrum fits with a number of different cultures. Similarly, Jaakko Palokanges did a similar study with Hofstede in conjunction with a number of interviews he carried out for his M.Sc. thesis at the University of Tampere. But as far as I could see, nobody had carried out direct research in the field.

And so, at the start of 2018, together with my business partner David Spinks, we began a journey. Our aim was to travel around the world, talking to Agile practitioners and teams and visiting organisations that have adopted Agile methods. We observed teams in action, speaking directly with people working in teams, Scrum Masters, Product Owners and Agile Coaches.

As a reference, we used “The Lewis Model”, a cultural model created by Richard D. Lewis which was first published in his book When Cultures Collide: Leading Across Cultures (First published in hardback by Nicholas Brealey Publishing in 1996) to understand the underlying cultural behaviours. The Lewis Model is a succinct, yet powerful tool. To explain briefly, Lewis determined that human behaviour could be described by three main categories of behaviour that he calls “Linear-Active”, “Multi-Active” and “Reactive”. Lewis maps different nations onto his model depending on how strongly their people, in general, exhibit behaviours from each of the categories, though people can do a test to see where they fit on the model as an individual.

We spent a total of 8 months travelling in various parts of South America, Asia and Europe. When we began the journey, we were unsure how people were going to react, but we have been thrilled by how open and welcoming the global community has been to us. We have met some amazing people doing great stuff and the journey has reinvigorated our belief in Agile. Our journey took us to all kinds of places where Agile is being applied; software development companies, universities and marketing departments. From small boutique companies of a dozen people to a large national energy supplier, multinational banks, financial institutions and national communications providers. We saw teams that were completely self-organizing, carrying out direct user research, regularly releasing and delivering value incrementally and iteratively. 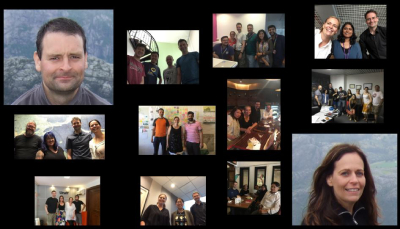 Companies that were fully empowering their people, encouraging innovation and finding creative ways to scale. We attended meetups all around the world and have found ourselves invited to speak about our experiences at international conferences from Indonesia to Greece. We have met a multitude of people, from those at the start of their journey into Agile ways of working, to meeting some of the people at the forefront of the Agile movement all around the world.

Now back in the UK, we are able to reflect on what has been an amazing journey so far. The world is a big place and, even though we travelled for so long, we could barely scratch the surface of Agile around the world. However, we have seen Agile ways of working in all of these contexts. We have a belief that with time, patience, determination and the removal of impediments, whether cultural, organisational or something else, Agile ways of working can apply anywhere.

What next for us? Well, we hope to share more about our journey in further talks and articles, and we are working on other ways to share our experiences with the global community.

In the meantime, if you want to find out more and read about some of the experiences we had, you can click through to our blog pages from here.

Glaudia is a passionate Agile Adventurer. She has been involved in working with Scrum since 2005 in a variety of roles covering Agile testing, Product Owner, Scrum Master and Agile coach. She has been travelling around the world since January 2018, visiting local companies, observing and interacting with teams and interviewing Agile practitioners to know if cultural behaviours/values influence Agile.

View all posts by Glaudia Califano →