Have you ever received praise, or even an award, for being great at something despite having no clue what you’re doing? Do you feel like a fraud, wondering what sort of voodoo you’ve unwittingly conjured up to make people think you know what you’re doing when the reality is quite the contrary?

I recently had a conversation with my girlfriend (going to school for her nursing degree) when she expressed her confusion with some praise she had received from her professor. Her professor had told her that she was the best nursing student she had had in years. “But how the hell could that be true?” she asked me. See, she sometimes struggles studying, is often worried about doing poorly on exams, and stresses about all of the things she doesn’t quite understand or can’t quite remember. At the same time,  she sees other people stroll into test-time confident and carefree. She sees others never asking questions and always seeming to just “get it”. By comparison, how could she possibly be any professor’s “best student in years?”

I could see she was distressed. Lucky for her, I could relate. In fact, one of many similar experiences I’ve encountered occurred just over a year ago. I had entered a competition called the Great Lakes Entrepreneur’s Quest (GLEQ), which is a business plan competition for new business ideas and up-and-coming companies. My company had not won any awards at the competition that year. There were over 100 companies that entered, with nearly 500 total participants. Then during the awards ceremony, they announced a brand new award that they were going to start giving out, the Spirit of Entrepreneurship Award, which would go to one individual who they felt exhibited the qualities of a great entrepreneur outside of just being able to write a good business plan. And the winner of the inaugural award was me. I was startled, confused, and amazed. If they had said my name half a second earlier, the person in front of me would have had a mouthful of Coke in their hair.

How could I win such an award, being in a room with so many great entrepreneurs and so many exciting companies and business ideas? There were companies in the competition already making a million dollars in yearly revenue (eligibility for the competition required that your company be making less than $3 million annually). By comparison, I wasn’t even making enough to quit my day job yet. I had to fake a doctor’s appointment that day just to attend the awards ceremony. Don’t these other people know what they’re doing more than I?

The answer to that question is the title of this post. No one knows what the fuck they’re doing. Not me, not those guys making bank, not anyone.

The 3 Types of Knowledge

To really understand how it is that no one knows what they’re doing, we need to understand the three fundamental categories of information. 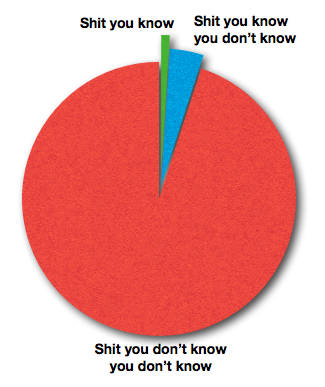 Note: this chart is not to scale; the red slice is unimaginably large.

Imagine being lost in the woods.

An example of shit you know would be knowing that it’s okay to eat an apple should you come across an apple tree (however unlikely that may be).

An example of the shit you know you don’t know would be wondering if you can eat these berries. As a result, you may decide to play it safe and keep moving, or you may decide to eat one now, see if you get sick, and if not, eat some more.

For an example of shit you don’t know that you don’t know, imagine if you were raised in an extremely sheltered environment, and you were never taught that some plants are poisonous. Finding yourself suddenly stranded in the wild, you would probably just start eating plants at random as you become hungry, without thinking twice. Pretty soon you would likely fall sick and die from dysentery or mycetism.

As illustrated by this example, you can see that the only dangerous category is the shit you don’t know that you don’t know (excluding extreme situations of life and death, where only the first category [shit you know] could save you). The same goes for any profession.

If I’m an engineer designing a bridge, I know that I need to account for that location’s climate when choosing the materials for building the bridge… this is stuff I know. I may not know exactly which materials have stress limits within boundaries set by the climate, but I can look it up… this is stuff I know that I don’t know. However, if I were a Veterinarian, and someone asked me to design a bridge, I may not even realize that different materials are affected differently by environmental factors… this would be stuff I don’t know that I don’t know. And in this situation, someone would probably die.

In my girlfriend’s case, say she’s a nurse that needs to administer a drug to a patient. If she knows that the prescribed drug reacts negatively with another drug the patient is taking, she knows not to administer the drug. If she remembers that the drug has twenty side effects and tends to react with other drugs, she knows to either look it up or ask someone else who knows, perhaps a doctor, before administering it. The only dangerous scenario could be not realizing that there could be any side effects or reactions, and thus administering the drug without any second thoughts. Again, the only dangerous category is the shit you don’t know that you don’t know.

Wisdom and the Art of Being Not Dangerous

Along these lines, “wisdom” may be defined as the ability to not be dangerous. So what then is the point of education and experience? Your professors and teachers (and typical exam structure) would lead you to believe that you must cram as much information as possible into the shit you know category. 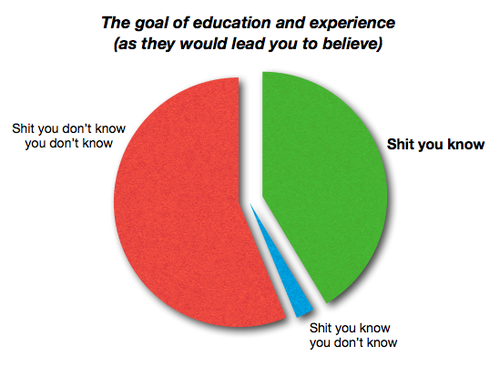 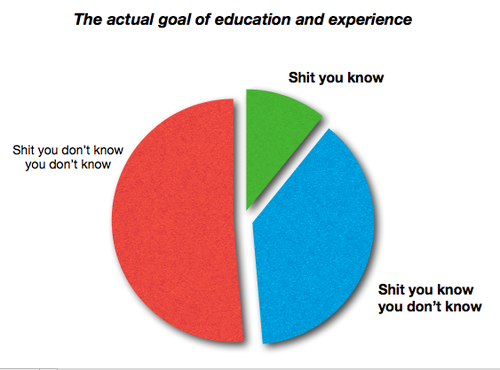 Now whether this means putting it into the first or the second category isn’t as important, as long as it’s not in the third category. In other words, the goal is to be not dangerous.

Everyone is as Clueless as You, If Not More

Here’s the secret though. Those other people fall into one of two categories, and neither one of those categories is more knowledgeable or able than you are.

One thing to note about this second type of confident people is that they are dangerous in two ways. For one, they exhibit a much larger third category as discussed above. They can be likened to a stereotypical teenager in thinking they know everything and not realizing how much there really is to know. However, unlike teenagers, they have a tendency to make others think they know what they’re doing, which makes others tend to rely on them. It causes others to put them in charge of things it seems like they know how to handle. And of course, since these people legitimately think they know how to handle these things, they are likely not to look it up or defer to people who actually know. As you can imagine, this causes their potential to be dangerous much more real than that of teenagers.

The real reason you feel like a fraud is that you have been successful in taking a lot of information out of the third category and put it into the second category; you know of a lot of stuff you don’t know. The good news is that this makes you very not dangerous. The bad news is that it also makes you feel dumb and helpless a lot of the time.

Relax, Be Realistic, You Can Do It

I hope that this helps if you find yourself sometimes feeling conflicted, recognizing the contradiction between your abilities and what other people say about your abilities. When you find yourself in a situation where you don’t know what you’re doing, don’t be afraid to ask for help. Don’t ever feel ashamed for not understanding something, even it seems like it should be obvious; if you don’t understand it, then it’s not obvious, plain and simple.

In fact, if you never feel clueless, and you always know better than everyone else, please let me know so that I can be aware of how dangerous you are.

View all posts by Steve Schwartz →